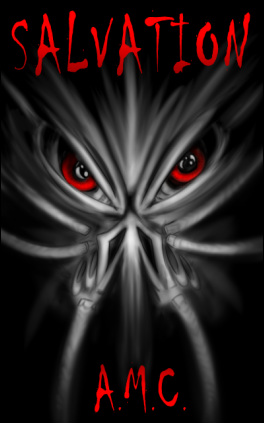 Salvation is my debut novel, over 3 years in the making.  The inspiration came from watching films, reading books and thinking to myself "That was good, but it could have been better if....".  Personally I often felt that the authors or screenwriters attempted to gain mass appeal from their work, cutting down the violence of war or combat to gain a 'PG' rating, or alternatively ensuring there was always a 'happy ending' with the main characters surviving insurmountable odds.

I often watched or read and thought to myself, even when it was a fantasy or Sci-Fi, that the story wouldn't happen like that in real life, and this devalued the work ever so sligthly to me. I am sure I am not alone in having have felt this at some time.  Take Harry Potter for example; surely one of the main children characters would have fallen at the hands of the Death Eaters during their interactions? Or, in Lord of the Rings, the odds of each one of the Hobbits surviving the countless altercations they endured must have been astronomical!

So, what is Salvation about?  Well, the easiest way to answer that is question is with two words - 'Sci-Fa' - Science Fiction meets Fantasy.  Think Independence Day meets Star Wars meets Lord of the Rings, but with violence seen in the Game of Thrones series.  The book is most definitely aimed at an adult audience, and I have purposely not looked to pull any punches!

So, to the plot -
Nearly a decade after witnessing the death of his family during an alien invasion, Alex is recruited as part of an elite group tasked with engaging the aliens at their home planet before they return to enslave mankind.  However the group soon realise that their foe and the galaxies are far more deadly and ruthless than even they feared, and learn of the true extent of the 5 power forces which wield unlimited supremacy.  Soon it becomes clear that Alex’s fate is intertwined with the destiny of the power forces, and he becomes embroiled in a battle with a dark enemy which will define the destiny for all living beings throughout the cosmos.

Here are some of the reviews received on Goodreads to date:
"You'd be mad not to go out and grab it.  I was informed by a fellow book lover that I must read it this book, that it was the best book that they had read in ages - So I went in with high expectations.  We get plenty of action, multiple worlds and races teaming up and fighting a common foe. There is big plot twist early on that I for one did not see coming, but then again maybe if I had read the synopsis first, things might have been different.  You get drawn into the character of Alex and his fight to save not only the world but the entire universe. Go Humans!!!! It is a very long story so be prepared for sleepless nights until you’ve finished – well it is an epic sci fi fantasy so you’d expect nothing less.  I can’t fault it, the story had me NEEDING to know how it ended.."


"Salvation will appeal to anyone captivated by fantasy and science fiction. The writing is engrossing, character development is great and it will leave the reader wanting for more towards the end, it really does. Fantasy blends with science fiction in this novel as the combat scenes are described flawlessly, it almost is like watching it unfold in front of one's eyes. It's like a hybrid of genres of epic fantasy, science fiction and thriller done splendidly. A great read and highly recommended one!"

Drawings of the main characters are accessible on the Artwork page.  To read the book please click here

Don't have a Kindle? Then download the free Kindle app for your phone, tablet, PC or Mac here:
http://www.amazon.com/gp/feature.html?ie=UTF8&docId=1000493771

If you have any feedback then please feel free to get in touch! :-)
Powered by

Create your own unique website with customizable templates.
google-site-verification: google732b7214432bc365.html